So far, Maria has been the one writing these 5 Things posts. But I told Maria I’d like to give it a whirl, so this time you get to hear from me about five things in our lives that, while not big enough to merit their own blog post, might still be interesting to you – especially if you’ve been wondering what’s been going on in our lives lately.

This post contains affiliate links. We earn a small commission each time someone makes a purchase through one of our links, which helps to support the blog. 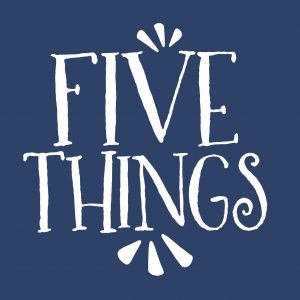 Dessa turned two years old a few weeks ago! Maria and I gave Dessa one gift this year, but it was a big one and a gift we knew she would love. After months of watching our toddler raid our kitchen cabinets and drawers for drawers and utensils to play with, we bought Dessa a play kitchen of her own. Maria spent weeks hunting online for a simple play kitchen that would look nice in our actual kitchen. Coincidentally, IKEA had the best price on a children’s kitchen and was a great match since our kitchen cabinets and countertops are also from IKEA.

After Dessa went to sleep on her birthday eve, I began what I assume will be a tradition for the next ten to fifteen years: nighttime gift assembly. It took a little over an hour to assemble Dessa’s kitchen, then another 15 minutes for Maria to wrap it, but it was worth it. Dessa loved unwrapping her giant birthday gift and has played in the kitchen every single day since she opened it.

Dessa’s birthday was on a Saturday and we decided to celebrate our little introvert’s special day in a low-key way with some of her favorite activities. We played in the yard with the sprinkler and the neighbor’s dog, then we walked downtown to get Japanese for dinner (Dessa loves miso soup, rice, and eats every bite of the pickled ginger that is served with our sushi). After dinner, we stopped by the park and took a walk to get ice cream (a Dole whip in Dessa’s case) at the local soft-serve ice cream stand. It was Dessa’s version of the perfect day. 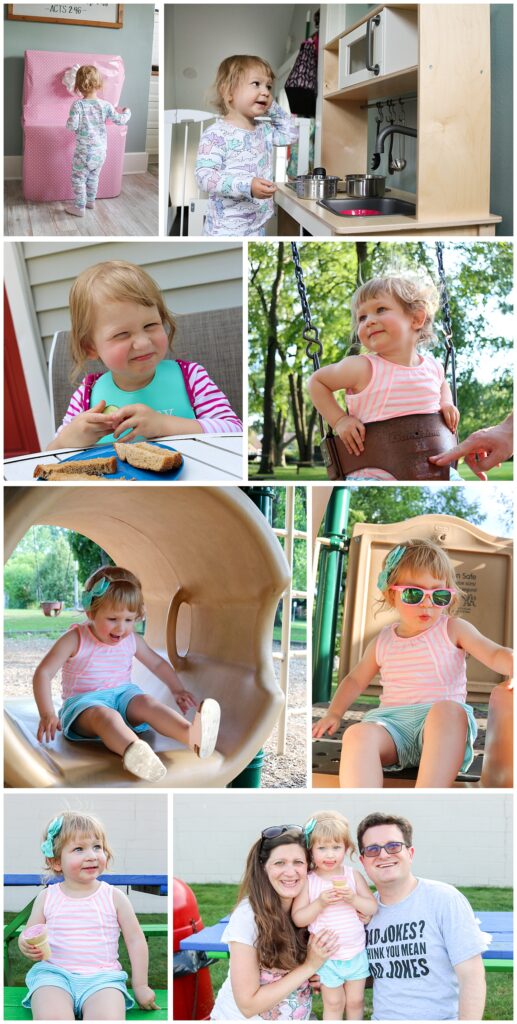 The next day was Dessa’s party. We kept things simple and had only our immediate family over for the celebration. Dessa has six cousins under the age of five and we watched the forecast all week hoping it would be cool enough for the kids to run around outside. Our prayers were answered and Dessa was so happy to share her sandbox, sprinkler, and bikes with her cousins. Instead of cake, we had strawberry shortcake for dessert because it was super-easy easy to do a dairy-free version for Dessa. All in all, it was a really nice birthday weekend filled with Dessa’s favorite things. 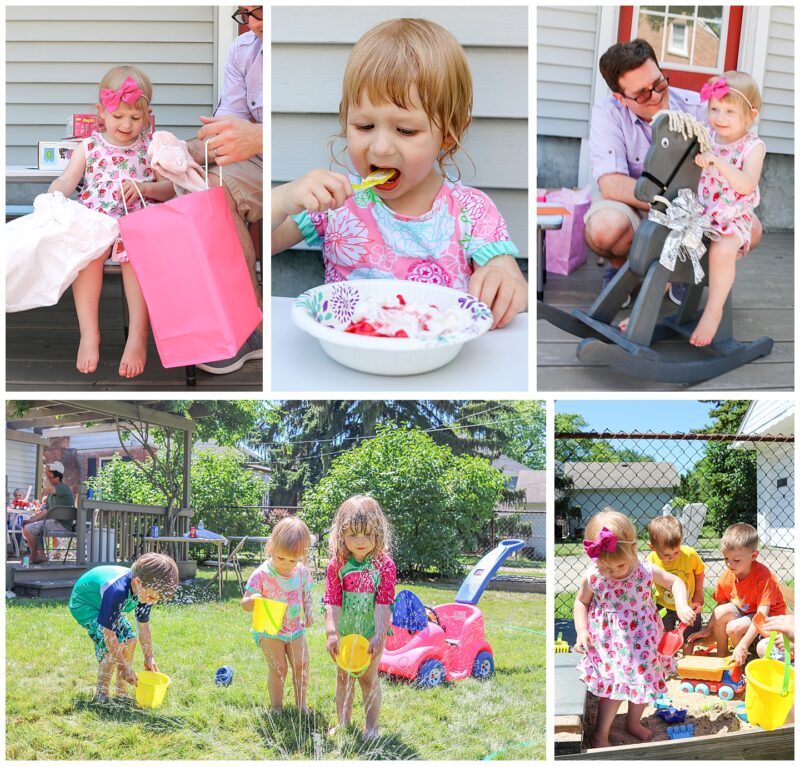 Knowing that we had a baby on the way who would eventually need the crib, Maria and I figured we would start slowly transitioning Dessa into a toddler bed a few months before the baby was due. We were rather nervous about the transition and planned it for months in advance. Our vision was that we would buy the toddler bed and Dessa would, over the course of a couple of weeks or a month, go from curious to playing in the bed and slowly work her way toward sleeping in it full time. 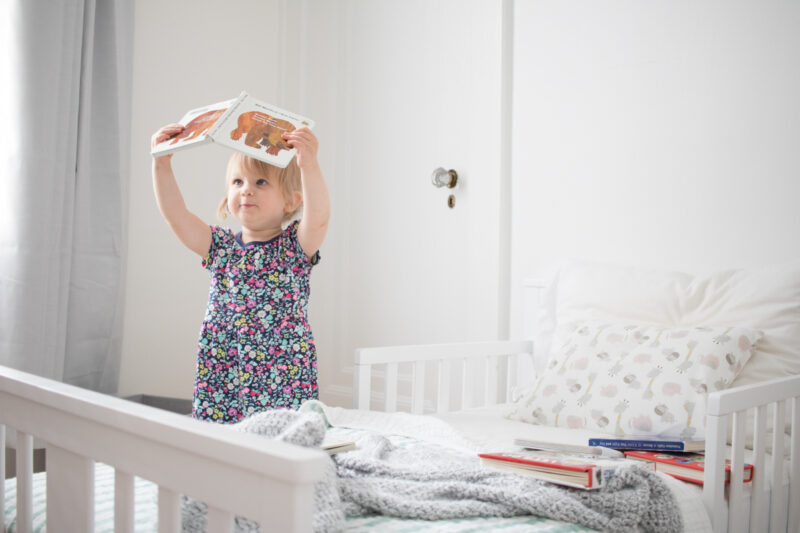 Dessa had other plans once she saw the “big girl bed.” She skipped right to sleeping in it full time the second night it was set up in her room. Not only is she napping and sleeping in it, but she also handled the transition like a champ without any real issues. It’s funny how Dessa can completely and pleasantly surprised us with how adaptable she is to new things, especially when her mom and dad obsessively plan and worry about them for MONTHS beforehand. 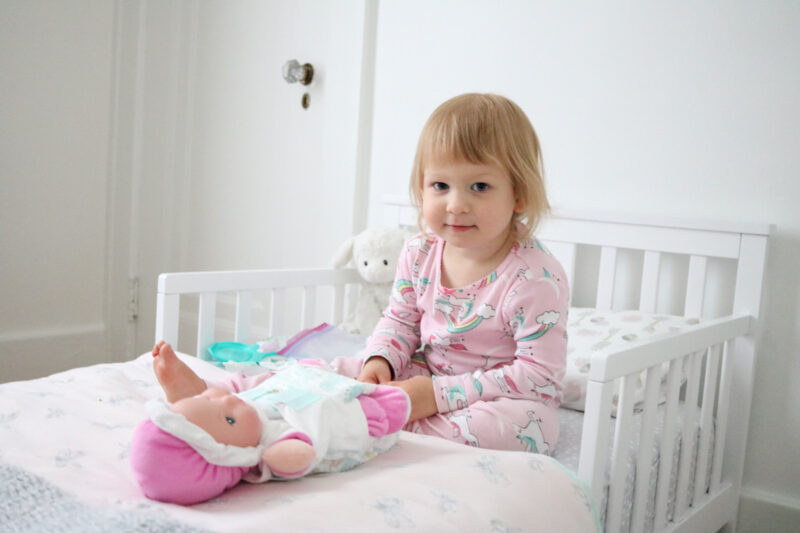 Speaking of Dessa’s crib, Dessa woke up from one of her naps in a particularly playful mood a few weeks before she transitioned into the toddler bed and Maria snapped a few photos of her silliness. She’s changed so much from the tiny baby we used to wrap in a swaddle and gently lay in the crib for the night. 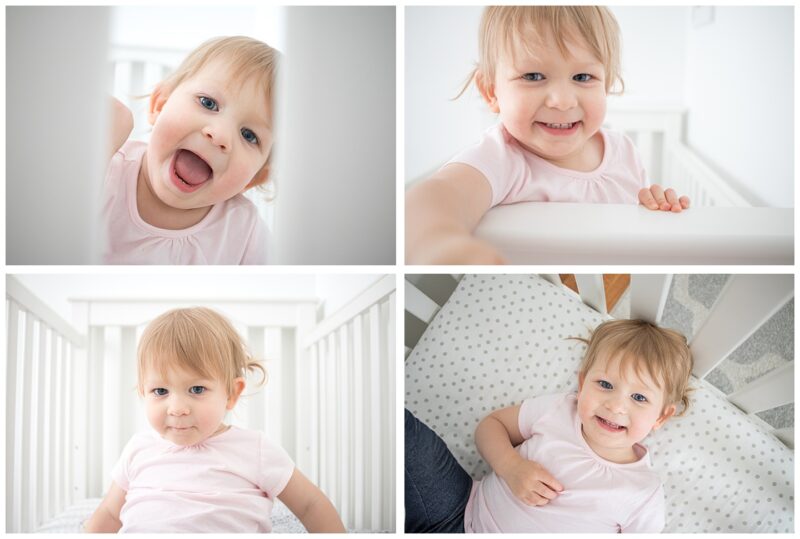 Oddly enough, despite starting so well with the toddler bed, Dessa’s sleep has become a challenge for our entire family. It started after a 4th of July trip up north to Maria’s brother’s cabin threw off Dessa’s sleep schedule.

Dessa usually goes down at night without any issue. We go through our bedtime routine of stories, toothbrushing, more stories, and a quick kiss goodnight before I tuck Dessa into bed. She crawls right into bed and settles easily most nights. The problems start popping up after midnight. Most nights, Dessa proceeds to wake up once, twice, or more. Each time, she crawls out of bed, walks over to the door, tries the handle, and cries when she can’t open it. We occasionally had restless streaks similar to this when Dessa was in the crib, but back then, she was trapped and used to fall back asleep on her own. That doesn’t happen anymore (except for one time where we’re pretty sure she slept on the hardwood floor by her door for nearly five hours). It’s easy enough to get her back down, and she generally falls asleep again within minutes of us tucking her back in. But man, it’s getting tiring to wake up a couple of times a night, every night. Especially on those mornings when she wakes up at 6:15, too.

Naps have become an issue as well, but in a much different way. Dessa is beginning to resist her naps and often pops right out of bed and cries at the door two minutes after we tuck her in and get her settled for a nap. On other days, she goes down and naps without an issue. We never know what to expect and we are scratching our heads trying to get to the heart of the problem. Our best guess is that the nap resistance is a normal part of being a two year old and that consistency and persistence on our part will win out in the end.

Ironically, we’re fairly certain Dessa’s sleep issues aren’t related to the recent introduction of her toddler bed because they were triggered after our weekend away from home. After the first week, we anxious to get to the heart of the problem and wanted to correct Dessa’s nighttime wakings effectively. We had no idea what was going on, so we turned to the book that has become our sleep bible every since Dessa was 6 months old, Solve Your Child’s Sleep Problems by Dr. Richard Ferber. Our best guess is that her naptime issues are caused by inconsistencies in her daily schedule and her nighttime wakings have something to do with the fact that it’s still light when she goes to bed, but is pitch black in her room when she wakes up at night. We’ve been working to have Dessa nap and go down for the night on a more predicable schedule and cut back on our commitments outside of the house to get her back on track. Dessa has started improving, with fewer wakings overall and more successful naps this week, but we still have a ways to go until we get our great little sleeper back.

The struggle between convenience and budgeting is very real in the Gavin household – especially when it comes to groceries. We started using Instacart back in February and quickly became converts to the world of grocery delivery services. The time savings for our schedule are enormous. During the week, it had always been a challenge for Maria to juggle trips to the grocery store around her commitments and Dessa’s nap schedule. If we waited to shop till the weekend, one of us would stay home with Dessa while the other shopped and struggled to get anything accomplished. Alternately, I would often shop on the way home for that night’s dinner and we would end up eating at like 7:00 PM, which is much later than we would like.

The groceries on Instacart are marked up a bit, but it was a convenience we willingly worked into our budget without a second thought. And then one day, Maria shared a post from Rachel Cruze (Dave Ramsey’s daughter) about grocery costs on Facebook that got us thinking about cutting back our spending. We have always allowed ourselves to splurge on food while cutting back in other areas of our budget, but we are certainly at the high end of the average.

That Facebook post got us thinking of ways to cut back on our grocery spending, and then Maria went to Costco to pick up a few items for Dessa’s birthday party. As she was checking out, a Costco employee reminded Maria that our membership renewal was due at the end of the month. He also reminded Maria of the perks of business membership, which we had in the past right after we got married while we were living in the condo with limited storage space. At the time, we didn’t earn enough rewards for the business membership to be worthwhile and we downgraded to regular membership a year later.

Now that we are about to become a family of four, we figured it’s the perfect time to try a business membership once again and make the most of our membership. We plan to buy as much as we can at Costco, track our expenses to see if we can effectively reduce our grocery and gas spending, and hopefully earn more than $60 cashback. In the past, we weren’t dedicated to making the most of our Costco membership, but I have a feeling it will be a much more effective tool in reducing our grocery expenses this time around, with a nice cashback bonus at the end of the year. Time will tell.

At the end of the day, when Maria is just about dead on her feet after a long day of chasing Dessa around while 29 weeks pregnant and I’m ready to relax, we do what I bet most people do: watch TV. Here’s a look at what we’re watching right now: 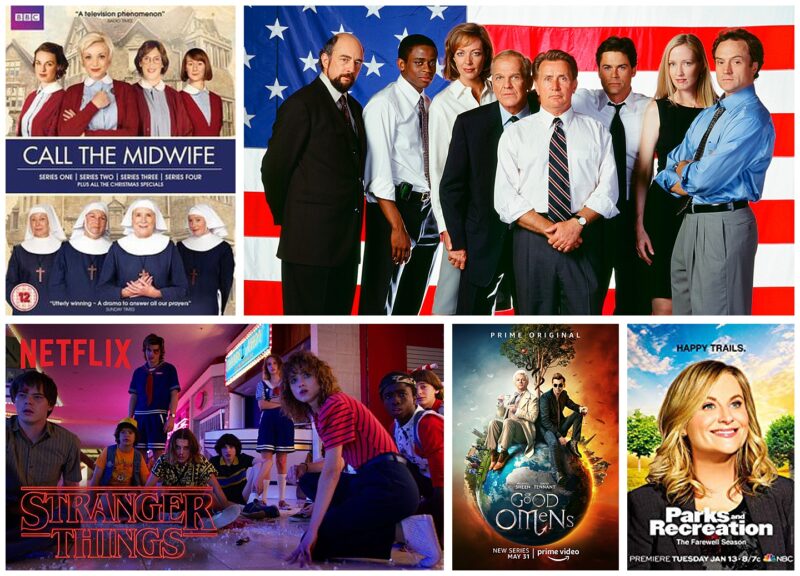 What are you watching right now? We’re always looking for good recommendations. Maria and I will probably finish out Call the Midwife and then watch the second season of The OA next. But that will take a little while at the pace we’re going. 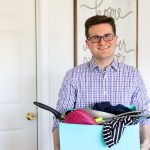 There’s Money Hiding in Your Closet 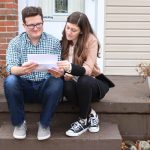